WhatsApp of late rolled out a new update to the beta version of its Android app, which comes with a tag id 2.18.214, and it includes a new feature that will change the way you can interact with notifications, though itâ€™s not yet available to use.

So far, the Facebook-owned messaging service users could either swipe notifications away if they werenâ€™t needed or, alternatively, hit the reply button, allowing you to respond to chats individually without needing to open the app. However, with the latest beta version, WhatsApp is testing a new â€œMark as Readâ€ button which will sit alongside the current reply button. As the name suggests, it will lets users to mark separate chats as read, thus presumably displaying the double blue tick symbol to users on the other end whenever itâ€™s activated. 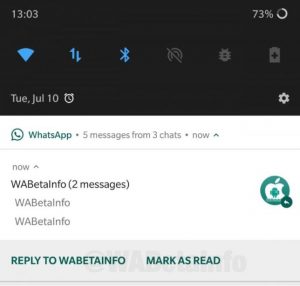 According to wabetainfo For development reasons, itâ€™s claimed that WhatsApp is yet to activate the feature for beta testers â€“ various improvements need to be made to the way the feature functions â€“ but considering the companyâ€™s previous history, it shouldnâ€™t be too long before itâ€™s available to use. Additionally, itâ€™s worth pointing out that a new chat mute button accessible through the Notification Center is also said to be in the works.

Most recently, WhatsApp introduced a new Forwarded Message label to its app that aims at slightly the source of messages to its users and will ultimately allow people to question the information they receive, thus reducing the spread of fake news.

You Can Now Download News For Offline Viewing On Chrome for...

Lists of Xiaomi Smartphones That Will Get Ths MIUI 11 Update