Sony has announced its latest CMOS image sensor for smartphones. Dubbed IMX586, it has 48 megapixels, each of them only 0.8 Î¼m in size, piled onto a 1/2-type unit. Smartphones with this new sensor will arriving as early as September 2018.

Itâ€™s Not Just About The Megapixels

In a press release, Sony said the increased pixel count will enable high-quality photos even when devices are using digital zoom. 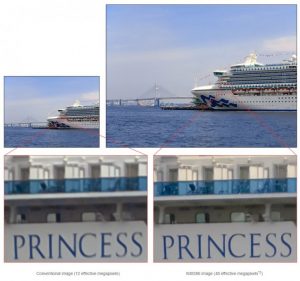 The IMX586 implements the Quad Bayer 2×2 pixel array. This means on most occasions it will bin four pixels together outputting the equivalent of 12MP sensor with large 1.6 Î¼m pixels.

For bright low-noise photos and videos when shooting at night. During the day or in a well-lit environment, the grid will return to its usual signal processing, reaching 48 MP photos in real time.

In actual fact, this is the successor of the 40MP sensor inside the Huawei P20 Pro, which also packs a Quad Bayer arrangement.

The first phone with 48 MP camera is likely to be the Xperia XZ3, expected at IFA 2018, although some rumors suggested it might have the same setup as the Xperia XZ2 Premium.

Each sensor is expected to cost 3,000 yen ($27) each. Well, we expect this for only flagship devices for now. The high cost of high quality sensors and imaging technology is why budget smartphones have poor cameras. Ultimately, the IMX586 will trickle down to mid-range phones and maybe even budget phones one day.

The IMX586 will be in market by September 2018 and by 2019, we should see 48-megapixel cameraphones hitting the retail stores around the world.