Rolls Royce Announce Flying Taxis, Will Be Ready By 2019 For Testing

Anytime the name Rolls Royce springs up, one always thinks of class, wealth and royalty. The British company seems to be diversifying into flying taxis. Remember the likes of Telsa, Uber, Airbus and some other auto firm are already in this race, so Rolls Royce has joined the bandwagon.

Rolls-Royce has revealed more details around its plans to launch a five-seater flying taxi and confirmed that a prototype vehicle will take to the skies next year.

The timeline for the launch was announced during a keynote presentation at the Farnborough Airshow, in Hampshire. Rolls-Royce expects the taxi to be operational within the next three to five years. 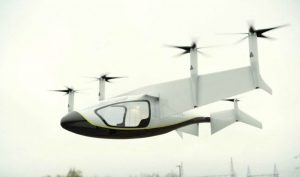 The aerospace company has purportedly ploughed millions into the development of the vehicle, which has cost Rolls-Royce in the ‘single-digit millions of pounds‘.

The hybrid-electric vehicle will be capable of both vertical take-off and landing, bypassing the need for a runway. Rolls-Royce says its plane will transport five passengers at speeds of up to 250mph (402 km/h) with a maximum range of 500 miles (800 km).

The Rolls-Royce presentation allowed the world-leading engineering company to divulge more details on its flying taxi concept, which it teased ahead of the keynote.

Speaking during the keynote, head of Rolls-Royce’s electrical team, Rob Watson said: ‘In this market, you will see something like this flying within three to five years, and we will demonstrate the system in two years.

Once it has reached the right altitude, the propellers on the wing can be folded away, reducing drag and cabin noise, with the craft relying upon the two rear propellers for thrust, Rolls-Royce claims.

Rolls-Royce says its flying taxi will be able to make use of pre-existing infrastructures, such as heliports on-top of buildings and airports.

‘Building on our existing expertise in electric technologies and aviation, Rolls-Royce is actively exploring a range of possible markets and applications for electric and hybrid electric flight. Rolls-Royce has a strong track record as pioneers in aviation.

‘From developing the first turbo-prop and jet engines to creating the world’s most efficient large civil aero-engine and vertical take-off and landing solutions, we have a very strong pedigree.

Sharp Aquos B10 Specifications and Price

Airselfie: A New Pocket-Sized Drone That Will Replace Your Selfie-Stick