It was just few months ago that Oppo R15 and R15 Pro premium mid-rangers were made official and now the company is already planning on how to announce a successor for at least one of them. It will be named Oppo R17.

Thanks to a Chinese leakster who made this known yesterday after sharing the image below on Weibo, the Chinese Twitter equivalent. 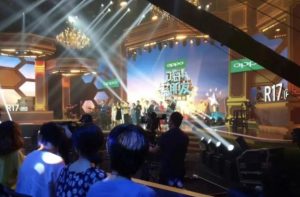 It was revealed at an Oppo-sponsored media event that the Chinese company has already started to tease the R17. No other info about the phone was outed at that event, but the same leakster has previously said that the handset will have up to 10GB of RAM.

Well, simply take this as a piece of “unconfirmed rumor”, however, unlike the name which is pretty much official at this point. Still, if this does come as leaked, then the R17 has the potential to become the first ever smartphone to sport such a huge amount of memory. That will definitely please those who crave ever bigger numbers on spec sheets.