Nokia 7 Plus has finally have a new Android One Smartphone with identical specs and that is coming from Xiaomi. The two devices share the same screen size, same software, and same processor, but have some interesting differences. Let’s have a look at both phones and tell us which you will prefer. It isÂ vs Nokia 7 PlusÂ versusÂ Xiaomi Mi A2

TheÂ NokiaÂ 7 Plus has had no real challenger in the upper mid-range space since its release, but now, we have one and it is a tough match. Letâ€™s get to the details.

Nokia 7 Plus vsÂ Xiaomi Mi A2: The Similarities

Being Android One devices, both phones run stock Android 8 Oreo. Fans of Xiaomiâ€™s custom user interface need to take note: MIUI is not present on the Mi A2. If you want MIUI on the Mi A2, get the Xiaomi Mi 6X.

As far as phone size, display size, and display resolution are concerned, the two phones are closely matched, though the Mi A2 is slightly thinner. They both have a taller display aspect ratio coupled with their 6-inch screen sizes. The Xiaomi is 5.99 inches, but that would be nitpicking, no?

Away from what we can see, we dive inside the Xiaomi Mi A2 and the Nokia 7 Plus to have a look at their processors only to find out that they both use a Snapdragon 660 chip â€“ and both are clocked at 2.2GHz. Both have 8 cores each. Ah!

What of RAM? the Nokia has 4 GB of RAM, while the Xiaomi has options of 4 GB and 6 GB RAM. And that is where things get complicated. The Mi A2 has three internal storage options â€“ 32 GB, 64GB, and 128GB, while the Nokia has only 64GB. So, at this point, you have to do some mixing and matching.

For wired connectivity, both devices offer USB Type-C ports. Both have Bluetooth 5.0 as well for wireless connectivity. As dfar as 2G, 3G and 4G network connectivity is concerned, the two phones are an even match too.

Nokia 7 Plus vsÂ Xiaomi Mi A2: The Differences

In addition, it has a 3010 mAh battery against the Nokiaâ€™s 3800 mAh unit. That is a significant difference, so the Nokia will go longer on a full charge. In addition, the Nokia 7 Plus has QuickCharge 2.0 for faster battery charging, a feature that is ahead of the Xiaomiâ€™s slower 5V/2A charging.

Xiaomi Mi A2 also lacks NFC, but has an infra-red blaster. With the Nkia 7 Plus, things are flipped the other way. 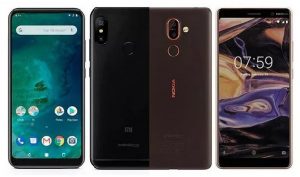 It is difficult to decide which camera will do what better just by looking at raw specs, as photography is a complicated thing. Only a proper shoot-out will reveal which does what better.

Nokia 7 Plus vsÂ Xiaomi Mi A2: Your Choice?

Having looked at the specs sheets of both devices, it isnâ€™t difficult to see that Nokia 7 Plus out-guns Xiaomi Mi A2 in quite a number of areas â€“ battery, charging, expandable memory, and headphone jack. However, you will find that they are not evenly matched either when it comes to pricing. Those superior features come at a price.

Nokia 7 Plus costs about $460, while the price of Xiaomi Mi A2 starts at about $330 and peaks at about $400 for the 6 GB/128 GB variant. The Nokia 7 Plus is more expensive than the highest-speccâ€™d Mi A2 variant. If cash is a constraint, you will settle for theÂ Xiaomi Mi A2. Same thing if you want better multitasking and more internal storage.

But if you care more about better battery life, fast charging, wired audio and expandable memory, and cash is not a problem, theÂ Nokia 7 PlusÂ is what you want.