It was barely a week ago that Google announced the establishment of Google Stations in some major locations around Lagos,Â Nigeria. But that was not the only announcement made at Google Nigeria. The tech giant also released a number of updates to the Google Go apps family. Google Go is the lite version of Googleâ€™s apps designed for entry-level devices. Which implies that Nigeria Android phones running Android Go get these new updates.

Due to a large population of low-income earners, Nigeria is largely entry-level smartphone territory. As such, Android Go is an important strategy to Google in improving smartphone user figures, whichÂ at present stands at about 25 million.

The country is set to become the 3rd largest country in the world after China and India by 2050. And Google, like everyone else, is scrambling to have a hold of it same way there was a scramble for China and India. We have seen the attention that those two countries have gotten from smartphone manufacturers andÂ app developers in recent years.

The new improvements pushed to Nigeria Android phones running Android Go Edition are only a small part of the growing attention being given to the country.

I use an Android Go phone and so have a personal interest in this bit of news. Letâ€™s take a look at some of the improvements that Google has made to its Android Go applications.

Google Go is my go-to partner for almost everything and now that a new feature is added, my relationship with Google just stepped up the stairs.

Now imagine this scenario: you are at the office, and busy to your bone. You are in the need of knowledge about a particular word/something but unable to leave your present work, simply run to Google, type the search query in your search box and go back to work. The results are ready, but your hands are full. Now, Google starts reading out loud results of the search. Wow! This is even said to be available in 28 languages. Amazing right?

In the previous version of Maps Go, whenever you clicked â€œNavigationâ€, the ap directs you to Play Store to download another application that has turn-by-turn navigation. You can read how to navigate on Maps Go here. 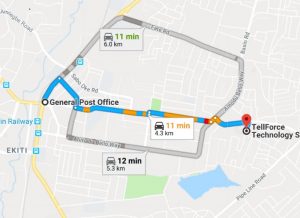 The good news is that this updated version of Google Map Go update has the navigation feature. The coolest part of this is that it runs smoothly even works with unstable network connections. Wow. So I donâ€™t have to worry about my connection? Yes!Â Plus street view? Google, thank you!

For the fact that YouTube Go compresses videos for me to watch/download, is enough love. But there’s still issues with the app especially when it comes to sharing downloaded videos. With this new update, any downloaded video is saved automatically to my smartphone gallery default app and can now be shared as initially wanted.

ALSO READ:  WhatsApp To Get More Features But Millions of Users May Be In Trouble

And that is the breakdown of the features of the Android Go apps updates that Google announced forÂ Nigeria Android phonesÂ last week. So, enjoy the new features.

HTC Releases Lists Of Its Phones To Get Android 9.0 Pie...