Mozilla is said to be working on a new internet browser for Android called â€˜Fenixâ€™, which will be released next year. The new project is believed to be in the developing stage, and it isnâ€™t totally clear whether it will in the end be released as a new app or a new version of Firefox, which is at present one of the more popular third-party web-browsers on most platforms, without leaving Android behind.

It will be recalled that aside Firefox, Mozilla still boasts of a number of other browsers on Android, including the privacy-focused Focus and the lightweight data-saving Rocket developed for the Indonesian market. The non-profit company is also working on a Mixed Reality browser dubbed Firefox Reality, which is meant specifically for the next generation of VR and AR headsets. 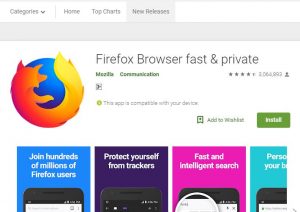 Thereâ€™s little information about the upcoming browser, but then as pointed out by Redditor hamsterkill, the name itself may be a bit of an homage to Firefoxâ€™s original codename, Fenix, which in turn, was a reference to how the project evolved from the remnants of the defunct Mozilla Suite, just like the Phoenix rose from the ashes.

Among other things, the initial commit message on Github also includes a famous quote from the late Stephen Hawking â€“ â€œRemember to look up at the stars and not down at your feetâ€. It also contains a few lines from Ylvisâ€™s 2014 single, â€˜The Foxâ€™, as well as a link to a YouTube video of â€˜Rize of the Fenixâ€™ from American comedy rockers, Tenacious D.

Currently, information about the new project are hard to come by, with Mozilla yet to officially say anything about it, so it will be interesting to see what exactly the Firefox-maker has in store for Android users going forward.

Moto G5S Plus Specifications and Price: Special edition of the 2016...