Microsoft has just unveiled its cheapest Surface device. Surface Go is Microsoft’s least expensive Surface device to date, with just a price tag of $399. This is a direct competition by Microsoft with productivity minded tablets such as Apple’s iPad and Samsung’s Galaxy Book.

The tablet is lightweight and highly portable weighing only 521.63 g and just 8.3mm thick. It features a 10-inch PixelSense display which is compatible with the Surface Pen, allowing 4096 levels of pressure. 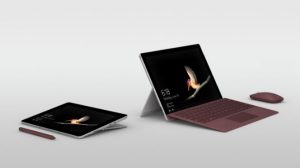 The tablet is powered by a 7th-Generation Intel Pentium Gold processor which is designed to provide reliable performance for everyday tasks, like using Microsoft Office and consuming media, while still being able to boast excellent battery life and a fan-less design. Microsoft rates the Surface Go as having 9 hours of battery life.

Microsoft is aiming this device at people on the go, while also citing its size as perfect to reading school textbooks in portrait mode. It comes just in time for the back to school season.