How To Use Incognito Mode on Your YouTube App

YouTube is one of the coolest service that makes the world interesting. There are thousands of thousands of videos uploaded millions of users to keep you informed and entertained.

However, despite being one of the most used services, before now, you could get yourself embarrassed with it. How?

ALSO READ:Â YouTube Is Testing Incognito Mode In Its App

YouTube recommends videos based on your previous search history. Now, imagine you clicked on a series of X-rated videos the previous night and you want to watch the summary of football match the next day in the presence of your friends. You will be immediately be greeted with loads of erotica videos, based on what you searched the previous night. Imagine that terrible scene embarrassment!

There are times when you donâ€™t want some videos that we watched to appear in our history. YouTube has finally solved this problem with its new incognito mode feature in its Android app.

The incognito mode for YouTube is available only on Android smartphone for now. There is no information about it rolling out to iOS devices for now.

How To Use Incognito Mode In The YouTube App?

In the Incognito mode, the avatar icon will be replaced by a Black Incognito symbol and there will be a Black bar at the bottom with a message â€˜Youâ€™re incognitoâ€™. 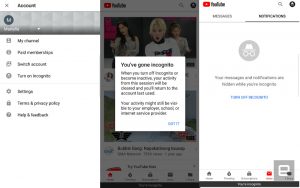 Once you have gone incognito, you can browse and watch any video you want and the app will no longer save it in your search history.

Note: You will need to update your YouTube app to the latest version for you to get this feature.

Huawei Rules China’s Smartphone Market, All Thanks To Honor Phones

How to Download Video and Add Subtitles To Them

MTN YouTube Video streaming: How To Turn Off Background Data…