Operating systems are developed to be highly secure, but once in a while, a threat will show up. Multiple viruses and malware have infected iPhone and Android smartphones around the world in the past. Android phones are not considered as safe as iPhone devices, but the operating system has made many improvements over the years.

Now, if you are careful enough, you should never have to worry about viruses. Here are some tips to help you keep your Android smartphone more secure:

1. Lock Your Phone with a PIN

PIN numbers have been used to secure phones even before smartphones were introduced. They are still a lot safer than newer alternatives. Fingerprints, iris scanning, face recognition, and voice recognition have not been developed well enough to be considered safe enough.

Also, using your birth year as your PIN is not safe at all. PINs are mainly used to block pickpockets and thieves from accessing sensitive data. If they manage to steal your phone, they may also already have your wallet and probably some form of ID. Most thieves already know that about 25 percent of the population uses their birth year as their PIN, and that will put your data at risk.

2. Only Use Apps from Google Play Store

Granted, Google doesnâ€™t manually check the apps on their store before approving them. However, they still scan apps for viruses and malware. Usually, applications will be allowed to the store once they are clear of these threats.

Installing programs from unknown third-party sources does not guarantee you this level of safety. It would even be wise to only allow installation of apps from Google Play Store.

This is because some links can be sent to you through email or instant messaging services. If you accidentally click these links, you may install a malware on your device. That is why you need to disable the installation of apps from outside Google Play Store.

3. Check the Permissions of Apps Before Installation

As noted, Google does not manually check the apps before accepting them into the store. They scan them automatically. To avoid installing malicious apps, you should take extra security measures. One good measure is to check the permissions the app needs. Confirm whether these permissions correspond to the purpose of the app.

For example, a flashlight app would not need access to your location. If you are in doubt, you should stop the installation. It is also a good habit to quickly go through the reviews before installing apps.

Google Play Protect is a feature that continually scans your phone for suspicious activity or misbehaving apps. In case you download apps with viruses, this feature will warn you before any damage is done.

Google Play Protect is turned on by default, but there is no harm in confirming whether it is still on. Just go to your system settings and click on â€˜Securityâ€™. All toggles should be activated. 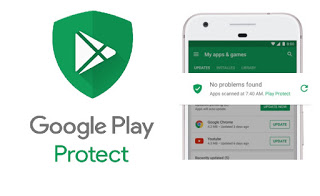 Locking your sensitive apps adds an extra layer of security to your data. Sensitive apps like email, browsers, and money-related applications should all have extra PINs. There are many services on Google Play Store that can help you lock your applications. It is advisable to use codes that are different from your main PIN.

Today, many people carry highly sensitive information on their mobile devices. For example, Android phones can be used for mobile banking, and that puts you at risk of getting huge amounts of money or your identity stolen. To make sure your information does not get to the wrong people, you should secure your phone tightly. Make sure you lock it with a PIN that is incredibly hard to guess.

For extra safety, you should also add a PIN to important apps such as your Gmail. Malware and viruses can be avoided by only using apps from Google Play Store.