Google will be making free Wi-Fi facilities available in about 200 sites in Lagos and five other states in Nigeria between now and 2019.

Within this period, about 10 million Nigerians, including Internet Service Providers (ISPs) are expected to benefit immensely from this project. The other states are Kaduna; Port Harcourt (Rivers state); Ibadan (Oyo state); Enugu and Abuja.

The project, which comes as Google Station, is in partnership with 21st Century, a leading ISP in Nigeria. Four of the Stations, including Local Airport, Landmark; The Palms and Ikeja City Mall, went live on Wednesday.

Google Station is a service that allows Google partners to roll out Wi-Fi hotspots in public places by providing software and advice on hardware to turn fibre connections into Wi-Fi.

Speaking with The Guardian and some five other select media houses on Wednesday, in Lagos, Googleâ€™s Vice-President, Product Management, Anjali Joshi, said the service, which is targeted primarily at countries, where the next-billion Internet users are set to come from, aimed to give users fast, secure, and easy-to-use Wi-Fi experience. 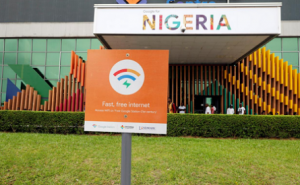 Joshi explained that in order to provide the service, Google offered fibre carriers, the companies, which build software for Internet-connected hardware, and venues a cloud-based platform and devices, which make it easier for them to provide, manage and monetise the Station hotspots.

She disclosed that the initiative is a long term project and that the security aspect has been fortified and encrypted to guard against any breaches.

Joshi said Google was doing this because the Internet has the potential to completely transform Africa. â€œAcross the globe, countries which have invested in nurturing digital and innovation-based cultures not only enjoy extraordinary wealth (and job creation), but have also transformed the way people live and do business. That positive change can only happen, however, if everyone can access the Internet,â€ she stressed.

Speaking in the same vein, Googleâ€™s Country Director, Nigeria, Juliet Ehimuan-Chiazor, who said the move was to ensure that more Nigerians participate in the digital economy, noted that the technology firm hoped to roll out Station to as many public locations as possible, including markets, malls, bus stops, city centres, and cafÃ©s, universities so that people can have a consistent Wi-Fi experience during their daily routines.

On the choice of Nigeria now, Ehimuan-Chiazor said the country is an important market for Google and the largest market in Africa, saying that the target was to develop the technology ecosystem and later scaled to other part of Africa.

Silent on the amount gone into the investments, she disclosed that the initiative was targeted at a populated area, with the hope that by 2019 about 10 million Nigerians must have benefitted.

â€œEven beyond GDP growth, the Internet provides opportunities to pursue social and developmental objectives. So we expect this to fuel some changes, especially in creating jobs, helping the SMEs, among others.

â€œWe have believed since the very beginning of Google that when more people have better, more dependable and secure access to the Internet, everyone in the entire Internet ecosystem benefits. Google Station will work to this mission by bringing more people fast, reliable, quality Wi-Fi to more places.â€