Can Android 8 Oreo attracts more smartphones to itself with the rate at which official general release date of Android P is fast approaching. It has been almost a year since the release of Oreo and the Android distribution figures for July 2018 shows that just 12% of Android smartphones run Oreo at this time.

Out of the eight versions of Android OS in account, Nougat (Android 7) is the most popular till date, as it commands a 31% share. Below is how all the versions accounted for stand: 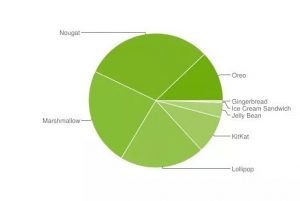 Android Oreo comprises of Android 8.0 and 8.1, both of which have a lot to do in catching up with because it may become even harder as Android P is right around the corner. The moment P hits the first set of devices, the next goal is to push it as much as possible.

Android Oreo, which presentlyoccupies the 4th position, will get less attention then.

Android OS still has some distance to go before it can eliminate fragmentation. The good news is that more smartphone manufacturers are committing to faster updates.

In addition,Â a reason amount of manufacturers are even embracing the Android One programmeÂ more than ever before. As a matter of fact, we are seeing entry-level Android smartphones launch with Android Oreo. That is ground-breaking. In the past, budget devices tend to ship with older software versions.

A big question is when will Android smartphones gets a good life-line for upgrades like iOS devices? We hope to see such happening some day.