Samsung Galaxy Note9 Will Be Officially Unveiled On August 9

Samsung has just sent invitations for its next Unpacked event that will be held in New York on August 9. Of course, what we are expecting majorly is the unveiling of the Galaxy Note9. 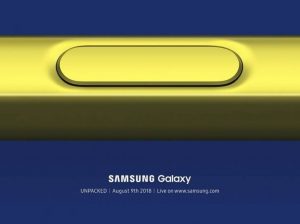 What Do We Know So Far About The Galaxy Note9?

As far as design is concerned, the handset should be pretty much indifferent. For instance, the placement of fingerprint reader is expected be below the camera setup in order to avoid any smudges on the camera lens.

Exynos 9810 Octa will be taking care of the number crunching for the EMEA markets while the US and China will get the Snapdragon 845 as usual. Some rumours says there would be a 512GB version of the device but it’s better to we stick to the standard 64/128/256GB of internal storage and at least 6GB of RAM.

Also, from the press invite, the S Pen button could be seen, which stands as a hint at expanded stylus functionality. Some Note fans will certainly fall for this as Samsung hasn’t really improved the iconic feature of the Note series lately.

Well, all of this is mere rumours and we will know for sure soon enough.