Last year, there was a great partnership between Qualcomm and Microsoft to make the Snapdragon 835 chipset to officially support Windows 10. Then a year later, that partnership was extended to the 845 chip. It looks like these Windows-on-ARM portable computers have proven successful enough to warrant a dedicated chip.

The Snapdragon 850 is not completely a new chip but itâ€™s just a faster 845 and it is aimed squarely at Windows ultra-portables. It comes with 8 cores as before with the â€œbigâ€ cluster clocked higher than the phone version.

The Kryo 385 Gold cores (based on Cortex-A75) reach as high as 2.96 GHz, a couple of hundred megahertz more than phone chips. This is mostly due to the improved thermals of the larger ultra-portable computers. 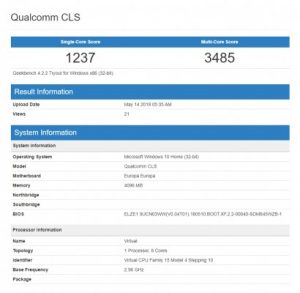 Lenovo is working on a device dubbed ELZE1, aka Europe, which will be built by Compal. HP has partnered with Quanta on the Chimera 2, while HP will be selling its Snapdragon 850-based computer to carriers in the US, the UK and Australia.

How To Fix Camera Errors On Your Phone

Do You Know That iPhone Is Not The First Phone with a Touchscreen Display?