Samsungâ€™s 2018 twin flagships sound similar. The Plus tag on one of the duo implies that it is the bigger of the two, but the differences between the Galaxy S9 and Galaxy S9 Plus are more than just the size and price.

Whichever of the two devices you pick, you will be getting a premium flagship smartphone that holds its own in 2018. You get Android 8 Oreo and Samsungâ€™s custom user interface, dust and water resistant body, FullView Display, Corning Gorilla Glass 5 protection, fingerprint scanner, powerful processor, Quick Charge 2.0 fast battery charging, plenty of internal storage space, 4G LTE, and much more. 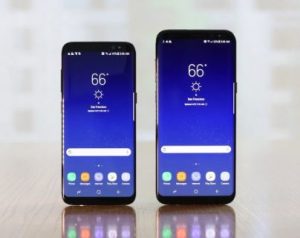 The Galaxy S9+ is bigger and heavier than its sibling. If you are more comfortable with a handy device, the S9 will probably appeal to you more. But most people prefer those displays the bigger they can be, so we are guessing the S9+ will have lots of fans.

While they both have the same processor, Samsung has equipped the bigger phone with more RAM, so it can run multiple apps smoother, giving the S9+ an edge in everyday usage.

It makes sense to give the model with the bigger display a bigger battery, after all it has been proven that a smartphoneâ€™s display is the greatest power guzzler. And so it is that the Galaxy S9+ has the bigger battery. Both devices have Quick Charge 2.0 fast battery charging.

We do not know why Samsung chose to put a single camera at the back of the Galaxy S9 and a dual one on the S9+. You know that dual cameras are cool and fashionable in 2018; donâ€™t you? That does not mean that a dual camera is necessarily better than a single one. After all, Googleâ€™s Pixel 2 cameras still whooped the behind of all of last yearâ€™s dual cameras.

Still, a dual camera on the bigger guy sort of sets it a notch apart from its sibling.

Finally, talking about price. Of course, the Samsung Galaxy S9+ costs a bit more than the S9. It costs about $100 more. That is about NGN30,000 more. It doesnâ€™t sound like a high price to pay for the differences between the two devices.

Telegram Update: Ability To Change Your Sent Image, Add Text Hyperlinks, and So On