Can we say it appears Facebook has a habit of making serious blunders and then apologize later for them, and yes, also forming a victim at the same time. The most recent event is that of a bug, which automatically changed the affected usersâ€™ post sharing settings to â€˜publicâ€™, which was later fixed and affected users were notified of the same.

The Social Network giant is now trying to address another oversight which proved to be an irritation for users â€“ the annoying â€˜You Are Now Connected On Messengerâ€™ notifications. A Facebook spokesperson has confirmed to TechCrunch that the his company is working on scaling back the notifications, and might even stop them altogether for users who never bother to check them. 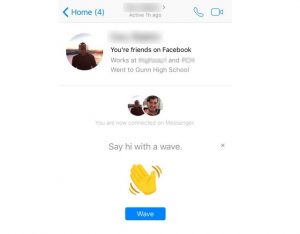 As we are well aware (read: bothered), when you become friends with someone on Facebook or when they join Messenger, a notification instantly pops up to inform that you are now also connected on Facebook Messenger. Once you receive the notification, you need to go to the Messenger app and open that auto-generated â€˜Say hi with a waveâ€™ conversation to clear it, or start a chat thread. It is annoying, and Facebook knows it.

â€œWeâ€™ve found that many people have appreciated getting a notification when a friend joins Messenger. That said, we are working to make these notifications even more useful by employing machine learning to send fewer of them over time to people who enjoy getting them less. We appreciate all and any feedback that people send our way, so please keep it coming because it helps us make the product betterâ€, says a Facebook spokesperson to TechCrunch.

Incidentally, â€˜Enjoy getting them lessâ€™ is Facebookâ€™s way of saying that these notifications are irritating for some users. So now, when you decide not to open them, its machine learning algorithm will send fewer such notifications. Well, hopefully.