Photoshop is a wonderful piece of software but can cause a third world war when viewers want to verify the authenticity of an image.

Expert Photoshoppers can create images which hardly be different from the real photos. Hence, reason why Adobe is now working on an AI to achieve the task. To recognise a real from a fake or modified image, the AI will meticulously study the patterns of noise across the image and spot anomalies. 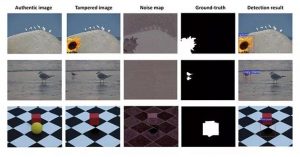 This is critical in areas of law where images are used as forensic evidence. While the quality of this AI’s judgment might be subject to debate, Adobe has shared a couple of examples which illustrate the AI’s abilities.

A bigger question which remains to be answered is how well the AI will be able to identify fakes when the image is of poor quality but that largely depends on the images used to train the digital brain. It is actually not surprising to see AI making such progress as we have seen examples like “Deepfake” but the fact that Adobe is trying to address the malicious uses of one of its most powerful and popular software.

Beside detecting odd spots in an image, the AI also detects and differentiates between different types of “tampering techniques”, said Vlad Morariu, a senior research scientist at Adobe and lead author of the paper on Computer Vision. The bigger battle which lies ahead of Adobe AI is to identify fake images creates using other AIs.

But AI is not just meant for policing around. Adobe recently introduced a heap of features in Photoshop CC 2018 which rely on AI to let you create beautiful, fanciful images. Just make sure you use them responsibly.