ZTE Shuts Down Global Operations Due To US Govt Sanctions

The second largest smartphone maker by sales volume in China is reportedly closing down its global operations following trade sanctions issued by the United States government against the Chinese firm. In an announcement to investors, ZTE said that they had stopped all trade operations at the Stock Exchange of Hong Kong Limited. The letter read, in part;

â€œAs a result of the Denial Order, the major operating activities of the Company have ceased.â€ 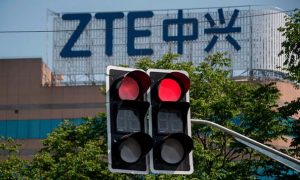 The Denial Order that the letter is referring to, is a sanction order that has been issued by the US government directing all US registered companies to desist from trading with ZTE. Robert Majauskas, a US Commerce Department official, said that ZTE had demonstrated a pattern of deception, false statements, and repeated violations. A July 2017 letter to US officials was â€œbrimming with false statements,â€ ars technica reports.

ZTEâ€™s woes began when the Chinese company admitted having trade relations with Iran and North Korea to sell US-made technologies to these countries. This did not go down well with the US government, as the relations were in violation of US sanction laws. Thus, ZTE was slammed a fined of $890 million and the company promised to take actions against the senior company officials who had orchestrated a scheme to violate US sanctions laws.

After several back-and-forth accusations between the US government and ZTE, Trumpâ€™s administration finally issued a Denial Order against ZTE on April 15. This order dropped a sledge hammer on ZTEâ€™s head, which relies heavily on US companies such as Qualcomm and Google to operate their business.

Even as the company announced that is had ceased all major operations, it maintained that it had sufficient funds to adhere to its commercial obligations and that they [ZTE] were actively communicating with relevant U.S. government departments in order to facilitate the modification or reversal of the Denial Order.

We have seen the US Government Issue similar attacks on Chinese companies. Huawei was under fire and had its plans to launch its smartphones in the US collapse after government officials urged US companies to cut ties with Huawei amidst security fears.

2018 Witnesses The Revival Of Android One Smartphones