The Samsung Galaxy Note9 has again been benchmarked on the popular benchmark app: Geekbench. A couple of months ago, we told you that the Note9 has been benchmarked, it was however for the version running the Qualcomm Snapdragon 845 CPU. This new benchmark is for the variant that is powered by Samsungâ€™s in-house Exynos 9810 CPU coupled with 6GB of RAM.

The general conclusion between the Qualcomm and Exynos variants of modern Galaxy phones is that the Exynos device usually perform a bit better in real-life. This was exclusively true with the Galaxy S7 edge, whose Exynos model users was enjoyed minimal lagging experience throughout the UI unlike the Qualcomm version was. 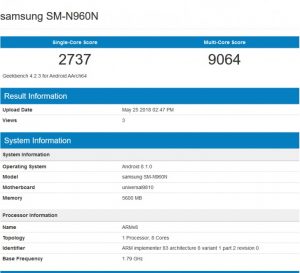 Nonetheless, letâ€™s checkout thee numbers and compare. The Qualcomm Snapdragon 845 benchmark that was run back in March scored 2190 in the single core test and 8806 in the multi-core. Meanwhile, the more recent benchmark (above) scored 2737 in single-core and 9064 in multi-core. Both benchmarks were run with 6GB of RAM.

Rumours also suggests that the Galaxy Note9 will have slightly larger display: 6.4â€ than the Note8â€™s 6.3â€. There are also talks of a larger battery and Bixby 2.0. Otherwise, we pretty much expect the phone to be similar to the Galaxy Note8 in aesthetics, only we expect the fingerprint scanner to move around.