Microsoft has just released a drooling drug to all media platform as regards the upcoming Surface Hub 2. It looks far better than the previous generation that was released three years ago. The product turned out to be a very successful business for the company as it was even unable to meet up with the demand.

Anyway, the new Surface Hub 2 is expected to be in market starting next year and only selected customers will be able to try it out early. The core upgrade is the sharp 50.5-inch 4K screen with rotating mount and an aspect ratio of 3:2. 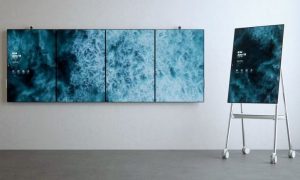 The unwanted news is that in the interim, the Surface Hub 2 will be available only in 50.5-inch variant but the good and interesting side is that the much slimmer bezels allow it to be stacked with up three more Hubs. As far as the slim bezels are concerned, some functions are not going to get any interference as the device retains the loudspeakers, the far-field microphones and the camera.

Microsoft is also working on one of the issues that plagued the early version – its limited portability. The company is teaming up with Steelcase to develop rolling stands.