Though, somehow far from now but not actually far as we think, they have started coming bit by bit. Today a leak allegedly shows how the screen protectors for both the Pixel 3 and Pixel 3 XL looks like. Since the latest OS in development â€“ Android P â€“ has native support for screen notches, which is the trending feature in the mobile world, the next-gen Pixels are most likely to have them.

If this is true (I mean a real big “if”), then only the bigger version will feature a notch, as you can see from the images below. The smaller Pixel 3 will have a different design, basically emulating what happened last year with the Pixel 2 and 2 XL, which, from the front, looked nothing alike. 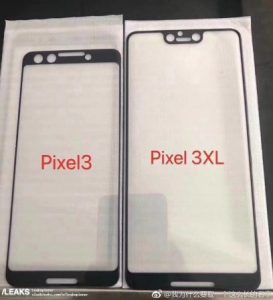 Both third-generation Pixels are getting stereo front-facing speakers, and the duo will have smaller bezels than their predecessors. That said, their bezels are still in no way comparable to the tiniest out there. Reminiscent of the vivo Apex these are certainly not.

The new Pixels should become official October this year, running Android P and powered by the Snapdragon 845 SoC.

Google Maps To Get Floating Categories