As at Q1 2018, all the statistics from the various analysts come to an understanding that Transsion controls African smartphone market. All of them. And now, Canalys has joined in the train.

Samsung In The Lead But Transsion Dominates African Smartphone Market

Individually, none of them matches Samsungâ€™s clout just yet, but TECNO is close: 5% close. Here is how the top five smartphone brands in Africa during the period fared: 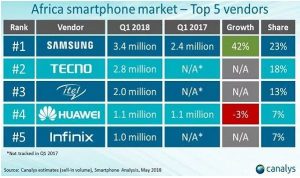 All put together, Chinaâ€™s Transsion Holdings controlled 38% of smartphone sales in Africa during the first quarter of 2018. While Samsung Mobile still sits at the top of the heap, the Korean smartphone maker has TECNO to worry about. TECNO is on Samsungâ€™s heels.

itel: King Of Mobile In Africa

itel is already the top mobile brand in Africa. Note: mobile, not just smartphones. That means, in terms of all kinds of mobile phones, itel outsells Samsung on the continent. That feat was achieved via the sales of itel feature phones. For more details, see iTelâ€™s success in Africa and the bottom of the pyramid.

Samsung grew 42% sales, year-on-year â€“ a very good showing. There are no records of the growth patterns for TECNO, itel and Infinix, as they were not tracked by Canalys a year ago. Which in itself is a commendable feat by the Transsionâ€™s three musketeers.