What Is Neighbourly App Meant For?

Neighbourly is essentially developed for asking hyper local queries to people in your locality. Users can ask about a certain type of doctor, or a place to get a haircut or a place to purchase a certain item. The moment the userâ€™s query is posted, people around the user will see it in their feed and can choose to respond. 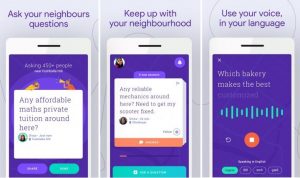 Aside typing out the query, the app supports transcribing as well, thus you can use voice to speak your query and the app will automatically convert it into text in another supported language.

The app is private so none of your personal information is shared with anyone. All anyone else ever sees is your profile picture and your first name. There is also no way to message someone privately and one can only reply publicly under the query.

The app is available right now to users in Mumbai. Anyone outside will have to join the waitlist. The app is still under development and will likely release on a wider scale when the stable version is released. You can download the app via the source link below.