We just have few days to the official unveiling of the much anticipated Nokia X â€“ also known as Nokia X6, which is next Wednesday by HMD Global. The will be the first phone of the company with a notch on the screen, thanks to various leaked images and videos buzzing the media.

The device which has a model number TA-1099 was listed on TENAA, revealing all its key specs. The Nokia X will run on Android 8.1 and will be powered by an octa-core CPU, clocked at 1.8 GHz. 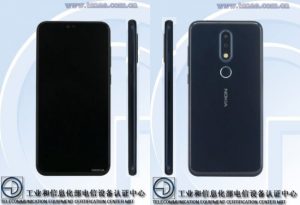 The TENAA listing does not actually mention a specific chipset, but the clock speed stated looks that of Snapdragon 636. The fact that Nokia X is expected to be a middle guy between Nokia 6 (2018) (Snapdragon 630) and Nokia 7 plus (Snapdragon 660) makes this even more credible. Potential buyers are going to have three RAM options – 3/4/6 GB, while the inbuilt storage is either 32 GB or 64 GB.

There is a dual camera setup on the back, with the primary snapper being 16 MP. The listing does not reveal the secondary sensor, but we know that the selfie cam will also be 16 MP.