Apps used to be the exclusive preserve of smartphones. We had apps from the days of the earliest smartphones powered by Symbian OS and Windows Mobile OS. We had apps for Palm OS and Web OS. And we got a deluge of apps with the arrival of Android OS and iOS. But that smartphone-monopoly on apps has ended. A new generation of feature phones now have 3rd party apps.

What Is Killing The Smartphone-monopoly?

KaiOS is a mobile operating system for dirt-cheap basic feature phones with with a small screen and alpha-numeric keypad, and it has 3rd party apps. The OS even has a voice assistant. It also supports 4G LTE, Bluetooth, GPS, Wi-Fi, and gets software updates OTA. All on a phone that looks like this: 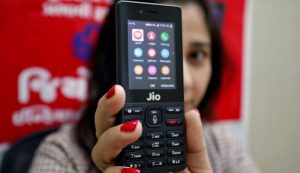 This is the Jio Phone, and it is selling like hot cake in India. It has done so well that the feature phone market in India is over-running the smartphone market there.

KaiOS is based on HTML5, with support for JavaScript. Most of the basic apps are available already and work is under way to add more.

You can only run one app at a time, but then you would have to be suicidal to want to multi-task on a basic phone with 512MB RAM. But being able to use your email, Facebook, Twitter, maps, stream music and TV shows, among other activities on a bottom-of-the-pyramid feature phone is a whole new level of accessibility unlocked.

Reliance Jio already have their own app store, called JioStore, running to provide apps for JioPhone users. The company behind KaiOS is scheduled to launch the generic app store, KaiStore, for all phones running the OS. The launch should happen this month of May 2018.

The phones in this category include Reliance Jio Phone in India, Alcatel OneTouch Go Flip in North America (surprised that basic feature phones sell there?), and the upcoming Nokia 8110 4G.

Why are these new 4G feature phones selling so well? They are bringing the digital lifestyle to people who earn little. With price tags around $25 (roughly NGN9,000), they are exactly what the doctor ordered for billions of people around the world. The Jio Phone is described as a fatal blow for cheap smartphone makers in THIS Reuters article.

The company behind KaiOS have chosen to tag their platform as â€œthe emerging OSâ€. That makes sense. With 30 million phones already running KaiOS , they seem to be on to something.

The smartphone-monopoly on apps has ended. Apps have arrived for â€œdumbâ€ feature phones. Or shall we just call them smart feature phones? I do not see the point in a new nomenclature. This is what all future feature phones will be like.

The Cat B35 Specs & Price: A Rugged Feature Phone With...