Most of us knows that the Camon series – camera-centric devices â€“ are actually for selfie lovers while the Phantom series is the companyâ€™s line-up of its flagship. There is also the Spark line that is actually supposed to be an affordable line from the Tecno and one device in this line is the Tecno Spark K7. The phone is available in Nigeria for N37,000. This device was launched last year but the company is getting ready to release an upgrade – the Tecno Spark 2.

According to the company, the recently launched Spark series of smartphones – Tecno Spark (K7) and Tecno Spark Plus (K9) â€“ were the bestselling device in Nigeria and Kenya by the end of 2017. Well, take this information with a pinch of salt since we donâ€™t have an actual source with figures to quote.

The Spark series was launched by Tecno to compete with its siblingâ€™s (Infinix) who is apparently taking over the budget market. The Spark offered decent specifications at a friendlier price without compromising on design, that was the whole philosophy and it seems Nigerians bought into it.

In 2018, the 18:9 aspect ratio has become a norm on most manufacturersâ€™ devices and Tecno definitely is not willing to be left out. The company already has the Camon X that has this aspect ratio and we will also be seeing it on the Tecno Spark 2.

For those who may not know, a display with an 18:9 aspect ratio is taller and slimmer than what we are used to seeing on smartphones. These displays are twice as tall as they are wide and manufacturers are able to use a bigger screen size on the phone. Speaking of the screen size, the Tecno Spark 2 will feature a 6-inch display with a resolution of 720 x 1440 pixels. This is of course not so bad if you ask me.

Though the Tecno Spark 2 is not largely a camera-centric phone, it will feature some decent cameras. The back camera will have a 13MP sensor with Auto Focus and triple LED flash. The front facing camera on the other hand will have an 8MP sensor with dual flash. 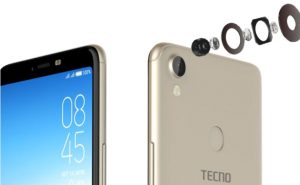 You will also be getting portrait mode on the Spark 2 if that is something you have always wanted. For those in the dark, portrait mode is the feature where you take photos and have the background blurred with the subject in focus. For years, this was possible to do with professional cameras and just recently we started seeing it on smartphones and the Spark 2 will have it.

Talking about unlocking our smartphones, we used to have patterns, PINs, passwords and the recently introduced fingerprint option. To make things even better, manufacturers are introducing iris and face unlock on their devices and Tecno doesnâ€™t want to be left behind.

The Tecno Spark 2 will have Face unlock as one of its key selling points. The fingerprint scanner will still be there and Face unlock will be an extra feature.

As expected, the Tecno spark 2 will come with a MediaTek processor. This will be the 1.3GHz Quad-Core MT6580WP processor. This is not that different from what we saw last year with the Spark K7.

Well, this is actually a minus here as the Tecno Spark 2 will be there for your 4G network. According to the leak, the company plans to have support for 2G and 3G only.

Tecno has always had devices with reliable batteries and I hope the 3500 mAh unit on the Spark 2 will not disappoint. This battery is 500 mAh bigger than the one we saw on the Tecno Spark K7 from 2017 and should be appealing for those who own that device and have always wanted a bigger battery.

So far, this is all we know about the Tecno Spark 2, we will update you on this device if and whenwe get more details.