The first pay-as-you-consume pay-Tv Television in Nigeria TSTV, has finally made itâ€™s decoder available in the market today, on April 1, 2018.

However, The TSTV management while unveiling TSTV Sassy decoder, announced that the new decoder will have some differences to the originally intended TSTV decoder. But the services and quality will still be the same. 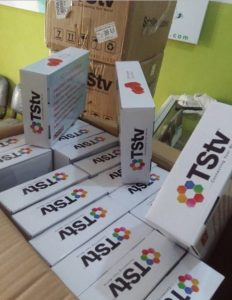 Features of The TSTV Sassy Decoder

Cost: The New TSTV sassy decoder is pegged at N3,500 only.

Channels: The TSTV Sassy decoder comes with over 70 channels sports, movies, kids, health, lifestyle channels etc. Which is significantly lower than the original TSTV decoder which was promised to come with over 200 channels. 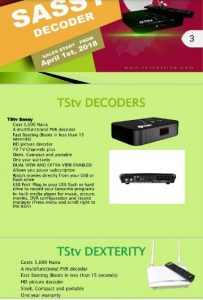 Daily Subscription: The sassy decoder has the â€˜daily subscriptionâ€™ feature as promised in the initial release on November 1, 2017.

Internet Data Caps: There is no Internet feature with the Sassy decoder as initially promised

Cost of Subscription: The subscription cost is as follows:

How To Get TSTV Sassy Decoder

You can pay for your TSTV Sassy cable subscription at a dealer shop or via the Quickteller website.

Note: Please note that there are no internet features with this decoder, and there are no Data caps linked with the subscription of the decoders. This feature only exists in the TSTV Dexterity Decoder.