TStv Now Allows Customers To Subscribe For Only Their Favourite

Telcom Satellite Television TStv, has started putting smile on its customers by giving then real value for their money. The new pay Tv have continue to add new channels and features to its service ever since the launch of the Sassy Decoder.

The latest addition is what TSTV called A’ La Carte Subscription. According to the company, “Aâ€™ la carte subscription gives a subscriber the opportunity to choose and pay for only their channels of interest.” 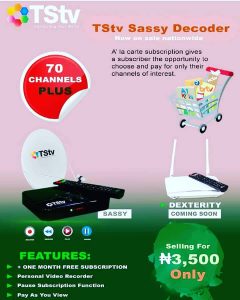 This simply implies that customers can only pay for the channels they are interested in and save money by so doing. This flexibility is not available in most other digital TV providers in Nigeria and Africa as a whole.

This new feature is currently lacking in some TStv rivals such as GOtv and Startimes. So, for example if your favourite channels are Discovery Channel, music or sport channels, you will only need to subscribe for them and ignore the movie, lifestyle, religious and kids channels.

The company was launched last year in Nigeria and some other African countries but the availability of Decoders and accessories were delayed until April 2018 when it decided to make available a version of the decoder called Sassy but promised to commercially make Dexterity decoders available soon. Though no particular date was mentioned.

Note that Sassy Decoder has about 70 channels and the TStv made 55 channels free for two months while the dexterity decoder will have over 250 channels including free data, wifi, pause subscription, record programs and so on. The price of Sassy Decoder is 3500 Naira while the installation cost is 2500 Naira.

What do you think about this TStv A’ La Carte Subscription? Hit or Miss!