Tecno Camon X is finally out and we have info on its CamonÂ  X Price, specs, features, reviews and where to buy the smartphone in Nigeria, Kenya, Ghana and other countries in the world. The device will soon be available on Jumia and Konga for those that want to order it online.

As promised on the April 5, 2018, Tecno Mobile launched two amazing smartphones called Tecno Camon X and Camon X Pro. From the naming, it’s obvious that Camon x is a stripped version of X Pro but the difference is not very much though.

You can check the features and specs of the X Pro by clicking here and then compare it with the one on this post.

The Tecno Camon X is a major improvement from last yearâ€™s camera champion, Camon CX and according to Tecno, it offers 30% in camera and performance. The duo of Camon CX and Camon X Pro are coming few months after launching the Camon CM. As you can see, the Camon series are expanding seriously and Tecno is not showing any sign of reducing the tempo instead its improving more. 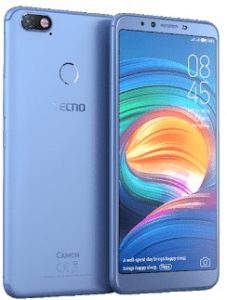 The main difference between Tecno Camon X and Camon X Pro is that the later offers more in terms of RAM, storage and the selfie camera.

The Camon X comes with the latest customized Tecno Mobile user interface, HiOS 3.3 with features a lot of new features like a facial recognition system, called Face ID. Another feature present is the night mode which first debuted on the Phantom 8 but has now been greatly improved.

ALSO READ:  1.5% Of Users' Passwords Are In The Hand Of Cybercriminals - Google

For the past 2 years now, Tecno Mobile has greatly improved on their design and the Camon X did not fall short of that glory. It comes in a perfectly crafted polycarbonate body, designed to modern standards, with the antenna band over the top.

The mono speaker is below the device and also for the first time on a Tecno Device, the 3.5mm earphone jack has been moved to the bottom. Also, the volume rocker, sim tray (which includes both SIMs and SD Card) and the power button are all on one side of the device, the right side. The fingerprint sensor retains its usual position at the back.

Like the Camon CM that was released in January this year, the TECNO Camon X is incredibly light and thin with a visual thickness of just 5.2mm and in terms of dimension, it measures 158.6 x 75.8 X 7.8mm.

This is actually not the first time something related to the Face ID is included on a Tecno device. It first featured on the Camon C7 and C9 and was named â€œRetina Scannerâ€. But it was heavily criticized because it was slow and couldnâ€™t work in low light. But the version introduced in the Camon X is way more advanced. Not only is it super-fast, it can also work in low light/No light conditions.

The display of the Camon X is quite larger than its predecessors. This is courtesy of the slim bezels design which has now become the order of the day in the technological world. The display is the Netflix standard, 18:9 aspect ratio which is also the same screen ratio of the Camon CM. This means that the display is longer with little bezels. Sadly the resolution has been pegged at 1440 x 720, the same one on the Camon CM.

The device sports a large 6.0 inches HD+ screen but compare to the Phantom 6 Plus, it is way smaller because the bezels have been significantly reduced giving more room for viewing pleasure.

Before now we heard that the device will feature an inbuilt cooling mechanism that helps keep the temperature of the device low at all times. However, there was no mention of the feature during the launch and might just be a marketing gimmick to hype the device.

As Tecno Mobileâ€™s custom, a Mediatek processor was used. The processor used is the Mediatek MT6763 Helio P23 which is designed for midrange devices. The processing speed is clocked at 2.0Ghz and it runs on Octa-core processor. This is a 20% improvement in performance compared to the Camon CX.

Tecno Camon X comes with a 3GB RAM and a 16GB ROM. It also runs on Android 8.1 Oreo, making it the first Tecno Device to feature the latest software. This is also the first device to feature Tecno Mobileâ€™s Customized UI, the HiOS 3.3.

HiOS 3.3 is the latest operating system from TECNO Mobile and is deeply customized for TECNO users, making its operation fast and smooth.

The camera featured on the Camon X is 20MP for the front camera (Selfie) with dual flash, while the Back camera is 16MP with a quad ring flash. Both cameras can capture amazing pictures in low light. The front camera also comes with some amazing features like the Portrait mode, Beauty mode and Panorama.

CAMON X is equipped with the latest generation of dual ISP image processor, this means that two processors work synchronously, the processing efficiency is better and faster; dark state/night noise reduction has also been upgraded on the Camon X compared to the Camon CX.

The Camon X is a dual SIM device and only accepts Nano-SIMs. Connectivity is smooth on the device because it comes with the standard Wi-Fi, GPS, Bluetooth, USB OTG, FM, 3G and 4G. Sensors present include E-Compass, Proximity sensor, Ambient light sensor and G-Sensor.

The Camon X is powered by a Non-Removable Li-Ion 3750mAh battery with features an inbuilt fast charging system. And with the well optimized HiOS OS running on the device, you are bound to experience excellent battery life.