Tecno Camon X Pro has been Launched And it comes with 24MP Selfie Shooter, Face Id, Android 8 Oreo, One Hand Mode And so much more.

Yesterday April 5th 2018, Tecno Mobile unveiled its latest flagship device – Tecno Camon X pro which is the higher variant of the Camon X launched the same day. The duo adds to the Camon series of Tecno.

Both phones shares similar features in many areas but as would expected the bigger sibling must have at least one thing that makes it a higher version.

There are amazing features available in Camon X Pro and in this post I have written about the 7 features and specs you must know before ordering or buying this latest phone.

The Camon X pro has higher specs in some areas and retained same specs in others. It also features the same slim, sleek and beautiful body with 6.0 inches screen. It only comes in one colour variant, Red. Would that be a deal breaker to some people? I think so because I some guys that hate red coloured phones with passion.

Camon X Pro has better specs and better display especially. There is a 24MP front selfie camera, which is 4MP higher than the regular Camon X but retains the same 16MP back camera, same as X. Of course this big camera feature is expected because the Camon lineup are synonymous with cool camera features. In fact, Tecno Camon devices are camera centric. The sensors, body size, processor, screen size and even the battery remains the same.

The Camon X pro arives with the latest customized Tecno Mobile user interface, HiOS 3.3 which boasts of a lot of new features like a facial recognition system, called “Face ID”, eye care (which first debuted on the Phantom 8, but has now been greatly improved), multi-window tab, “one hand mode” and many more. 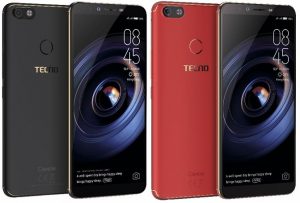 Tecno Mobile equally Launched the base version, the Camon X with 16GB ROM and 3GB of RAM.

Unlike what it used to be, Tecno Mobile has greatly improved in design as you can see from the recent devices they released. This camon X Pro is one of the most beautifully designed Tecno Smartphones with a perfectly crafted polycarbonate body, designed to modern standards, with the antenna band over the top. The device is available in red and midnight black colours.

The mono speaker is positioned just below the device and also for the first time on a Tecno Device, the 3.5mm earphone jack has been moved to the bottom. Also, the volume rocker, sim tray (which includes both sims and SD Card) and the power button are all on one side of the device, the right side. The fingerprint sensor retains its usual position at the back. Though I personally prefer front mounted fingerprint sensors.

Like the Camon CM that was released in January this year, the TECNO Camon X Pro is incredibly light and thin with a visual thickness of just 5.2mm and in terms of dimension, it measures 158.6×75.8×7.8mm.

Among all devices in the camon lineups, Camon X Pro has the largest screen size with slim bezels. The display is the Netflix standard, 18:9 aspect ratio which is also the same screen ratio of the Camon X. This means that the display is longer with little bezels. The resolution has been increased to 2160×1080, an upgrade over the base version.

I’m talking about a large 6.0 inches FHD+ screen but compare to the Phantom 6 Plus, it is way smaller because the bezels have been significantly reduced giving more room for viewing pleasure.

Like I said earlier, Tecno is improving continuously. Now Face ID is an improvement from â€˜Retina Scannerâ€ which was featured on the Camon C7 and C9. This version is much more advanced and super-fast. The version introduced in the Camon X pro is not only super-fast, it can also work in low light/No light conditions.

Ever been in a situation where one of your hand is busy and you desperately need to operate your device? Well, this is the feature you desperately need. Once you activate this feature, your screen shifts to one side and it easy to operate using one hand. You can also adjust what side you want the one-handed feature to face, left or right.

This feature allows you to view a video on a small screen while doing something else. For example, you can be chatting and still be watching a clip. Amazing right? You can also move the floating window to any part of the screen.

Just like the base variant, a MediaTek processor was also used on the Pro. The processor used is the MediaTek MT6763 Helio P23 which is designed for midrange devices. The processing speed also clocked 2.0Ghz and it runs on Octa-core processor. Camon X pro comes with a 4GB RAM and a 64GB ROM, which is way more than what the Camon X offers. It also runs on Android 8.1 Oreo and also features Tecno Mobileâ€™s Customized UI, the HiOS 3.3.

The camera featured on the Camon X pro is quite higher than the regular Camon X. 24MP for the front camera (Selfie) with dual flash, while the Back camera retains its 16MP with Quad-ring flash. Both cameras can take amazing photos in low light. The front camera also comes with some amazing features like the Portrait mode, Beauty mode and Panorama.