Blogging and Social media use around the globe is relatively new and laws are yet to meet up with the new way their users are sharing content, as well as earning a living online.

This is actually the reason some governments around the world have been considering putting up new rules and regulations that are aimed to regulate this new and ever growing industry.

In 2017, Tanzania government considered introducing a new law, the Electronic and Postal Communications Regulations 2017 which had a number of interesting laws to govern social media users and bloggers.

The Electronic and Postal Communications Regulations 2017Â has now been recently signed into law and has taken effect since March 2018. These regulations applies to bloggers, Internet cafes, online content hosts, online forums, online radio/TV, social media, subscribers and all online content users or anything related to online content.

The list of regulations has a number of interesting laws which are highlighted.

Under the Second Schedule of the regulations, Tanzania will charge for these type of licenses and they will last for 3 years each:

This is the application form that one should fill to be licensed as an online content provider. 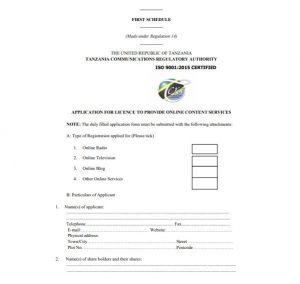 There are interesting laws that have been passed under these regulations, like the fact a social media user has to have a password for the hardware used to prevent unauthorized access, which is odd. Under section 18, anyone who contravenes the provisions of these Regulations will be liable to a fine of not less than five million Tanzanian shillings (US $2219.31).

We have seen similar moves being made by governments from the region. In Uganda for example, the government recently proposed setting taxes on use of platforms like WhatsApp, Skype, Viber, Twitter and the likes.