For those that have been using Facebook for a while, chances are youâ€™ve use youâ€™ve tried and abandoned quite a few apps. Facebook apps can be useful and fun, but they also have permission to do all sorts of things with your info.

For the apps you use regularly and trust, thatâ€™s not a big problem, but if youâ€™ve got a lot of apps that you tried once and then stopped using or forgot about, that could turn into a problem one day.

The good news is, Facebook now lets you bulk remove third-party apps , and any and all posts those apps may have published on your behalf, a welcome privacy change that should make it easier to strip access to your profile from services you no longer use.

This update is coming few weeks after Facebook was accused of violating user privacy by data privacy scandal linked with data analytics firm Cambridge analytical (CA). The bulk removal tool could make it much easier for users to take control of their data and protect their identity, though the damage to Facebookâ€™s reputation is largely done.

How To Bulk Remove Third Party Apps From Facebook? 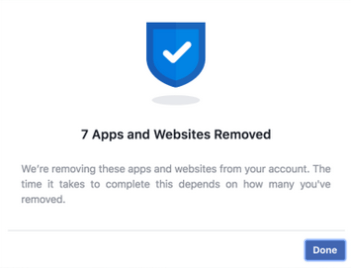 Facebook further says that it will now remove apps automatically if a user hasnâ€™t accessed them in over three months.

What do you think about this development?

How To have The Same WhatsApp Account on 2 Different Phones?

Konga and Yudala To Merge