Jeff Bezos the founder of Amazon which is the largest online retail, and he is also currently the richest man in the world with net worth of $120.1 billion. After Facebook has lost nearly $100 billion over the Cambridge Analytica scandal, Amazon has also joined the league to lost $53 billion which was caused by Donald Trumpâ€™s opinion.

On Wednesday, The White House denied Amazon was currently any kind of priority and said it has â€œno specific policies or actionsâ€ regarding Amazon â€“ the largest online retail. Donald Trump, the President of USA had to jump into the fray with a tweet on Thursday morning. He said:

I have stated my concerns with Amazon long before the Election. Unlike others, they pay little or no taxes to state & local governments, use our Postal System as their Delivery Boy (causing tremendous loss to the U.S.), and are putting many thousands of retailers out of business! 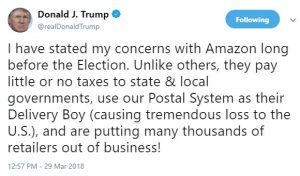 Moreover, there have been long argument and complicated debate whether Amazon is screwing the post office: Some sources said Amazon helps the Postal service by bringing more increase in package deliveries and other analysts argued that Amazon is getting a sweetheart deal and the government is essentially subsidizing its shipping.

The price of shipping at USPS would have go up an average $1.41 per package in 2018 to cover the cost of delivery but has too many issues that contributes to its financial problems.

And Amazon is looking to use its enormous capital to starts its own delivery service, then weâ€™ll likely see how the USPS does without it in the near future.

Google To Shut Down Its Free goo.gl URL Shortener Service