Ever since the revival of the Nokia brand by HMD, fans have been anticipating for a true flagship by company â€“ a phone that can be on par with the Galaxies and iPhones of the world. And now, it seems the upcoming Nokia 9 may be the sweet baby they are waiting to see. Or, at least, letâ€™s say it would be suitable with the description based on the latest leaks.

A list of Nokia 9 specs and features has appeared online, signifying some great interesting things for the upcoming Nokia flagship. However, itâ€™s too good to be true? Maybe, but it’s still deserve our attention anyways. Below are the leaked features: 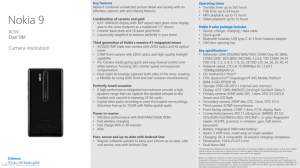 Firstly, the list suggests that a ZEISS-branded, triple-lens camera setup may be in tow for the Nokia 9. This certainly makes sense, seeing as how the triple-cam Huawei P20 Pro could very well be the result of a licensing deal between Nokia and Huawei.

Also, the specs sheet lists the three cameras on the Nokia 9 as main (wide), tele, and monochrome â€” with respective resolutions of 41MP, 20MP, and 9.7MP â€” which is suspiciously similar to what we saw in the Huawei P20 Pro. The main 41MP camera is also mentioned to have an f/1.5 – f/2.4 variable aperture, similar to the Galaxy S9+, with 1.4 um pixel size.

But even more interesting, perhaps, is the mention of a Xenon flash in the leaked specs sheet. That’s a feature that we haven’t seen in quite a while on a smartphone, and something that fans have been clamouring for for years. The sheet lists both Xenon and LED flash modules, which, if true, means that users will not only get all the benefits of a powerful camera flash, but also a flashlight. Since Xenon flashes operate in short, powerful bursts, they cannot be used as flashlights.

Unfortunately, this doesn’t quite fit in with the suggested dimensions of 150.6 x 75.2 x 7.3 mm for the Nokia 9, as Xenon flash modules tend to be on the bigger side. At 7.3 mm, the Nokia 9 would be way too thin to fit in both a Xenon and an LED flash.

Other rumoured key features of the Nokia 9 include a 6.01″ QHD OLED display with an 18:9 aspect ratio, Snapdragon 845 SoC, IP68 ingress rating, “in-glass” fingerprint recognition, and a 3,900 mAh battery. Oh yeah, and let’s not forget Android 8.1 Oreo out of the box.

Well, all these sounds to good to be true? Well, perhaps, but we do have our fingers crossed that at least a couple of the features listed here will be making their way into the Nokia 9.