Google appears to be working on rolling out a new update for the YouTube app, which adds a new dark mode, just like the one that was released on desktop last year.

Aside that, thereâ€™s nothing new except for this new dark theme, but one thing that’s worth citing is that the update will initially be available to iOS users only. 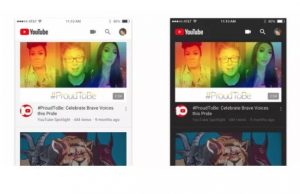 According The Verge report, Google is planning to introduce the dark mode to the Android version of YouTube â€œsoon.â€ In case you’re wondering why a Google service is getting a new feature on iOS before Android, we can’t really tell why is that happening in this case, but it’s probably related to the fact that YouTube has two different teams handling development for the two platforms.

It remains to be seen when exactly YouTube for Android will get the new feature, though we kind of expect it â€œto go darkâ€ in the next couple of weeks.

ALSO READ:  Android 11 Has The Fast Adoption Rate Ever in Android Ecosystem
Advertisment

Infinix Hot 6X Specs and Price: All you need to know