At last, the long wait is about to end as Tecno Mobile is set to unveil its two latest phones – Camon X and Camon X Pro – on the 5th of April, 2018. Tecno Mobile has been very busy working on these flagship devices which will be added to the Camon series which are to be released soon. 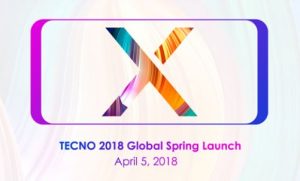 This article is all about what we are expecting from these devices (Tecno Camon X and Camon X Pro).

Firstly, the duo is expected to be an upgrade to last year’s Camon CX and CX Air as far as camera department is concerned.

As usual, devices in the Camon series are known to be camera centric but these new Camon X phones comes with an extraordinary camera features which has not been heard of in any other phone from the brand so far. We are talking about a 60MP super pixel zoom which also comprises of dual 12 + 20 MP Dual Rear Camera with Blink Tech, quad-LED flash. There is also an 8MP dual front shooter LED flash for selfies. These are the front facing cameras.

They will come with Android 8.0 Oreo preloaded, 60MP super pixel zoom rear or back camera and a powerful dual lens selfie camera. Tecno Mobile even confirmed this on their official page, saying;

The smartphones will come with a special camera feature called Blink-to-Capture technology which will trigger the Camera when the focused object blinks.

This technology is made possible with a facial recognition tech that is already available in many phones. However, experts suggest that this will be useless when the object in focus is not a human being.

Aside from the above features, it is also rumored that the Camon X and the X Pro will feature a buit-in cooling system, aimed at ensuring that stays cool even during demanding tax.

To cut this short, below are some rumoured features of the devices.

Both Tecno Camon X and Camon X Pro will be commercially available in the market starting from April 5, 2018. Countries that it will be shipped to includes Nigeria, Kenya, Ghana, Egypt, Cameroon, Tanzania, Uganda, Rwanda, among others. It will also launch in the United Arab Emirates (UAE).

However, itâ€™s advisable to take this with caution as things might change on the official released date. Stay tune to get update on these device.

Amazing! Next TECNO Camon To Feature A 60 megapixel Camera