Last month, Samsung launched the Galaxy S9 and the Galaxy S9+. According to the analysis in terms of how much it cost the company to build the device released by TechInsights, the Plus version and got a price of $379, which is $10 more than the Galaxy Note8, making the S9+ the most expensive Samsung smartphone to build so far.

The analysis compares the 2018 popular flagships such as the Galaxy S9+ (global version), the Galaxy Note8, the Galaxy S8+, the iPhone 8 Plus and the iPhone X. Of all these smartphones, only the Apple flagship is costs more to produce with a total cost of $389.50, just $10 more than the new Samsung device.

How The Total Cost Was Reached? 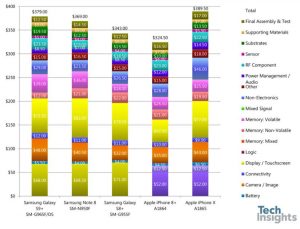 Looking at prices for different components, the Exynos 9810 chipset contributes $68, while the Super AMOLED panel is estimated to cost $72.50. Other expensive parts are the camera, the memory, and non-electronics, which is mostly the glass sandwich shell of the phone.

The $379 price is just the manufacturing cost. This means it doesn’t include other expenses like research and development, marketing, distribution and taxes.

Samsung Movie Maker Will Be NOT Available For Android P Users

Apple Stops Selling iPhone 8 And iPhone 8 Plus Because Of…