Is it strange that the Samsung Galaxy Note9 was spotted at Geekbench this early? Well, it may not be odd, if the rumoured time frame is true. And seemingly, its Galaxy S9â€™s doing.

The announcement of the second 2018 flagship may come as early as July or August, according to info that Samsung Display is pulling up the AMOLED production for the Note9 from June to April, says Korean publication The Investor.

This is partially because the Galaxy S9 isnâ€™t selling as well as Samsung expected and also because the company wants to preempt the new iPhones. 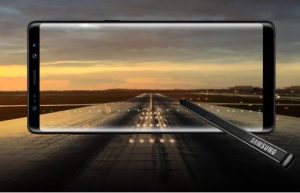 Anyway, the new screen will be slightly larger â€“ 6.38â€, up form 6.32â€ â€“ but will not hide a fingerprint reader beneath it. Huawei and Goodix announced a phone with an under display fingerprint reader, but thatâ€™s a â‚¬1,700 unit and doesnâ€™t quite prove that the tech is ready for mass production (or that it will be in a few short months).

Last year, the iPhone X was late because of component shortages, which gave the Note8 some breathing room. In order to have a head start this year, Samsung will need to launch early. Especially amid rumors of a 6.45â€ OLED iPhone coming this year.