By Andre Falana On Mar 26, 2018
Share
Join Us On Telegram
Related Posts

The founder of a Russian company that carried out one of the worldâ€™s largest Ponzi schemes of all time – MMM, Sergey Mavrodi is dead.

A report by Moskovsky Komsomolets says the initiator of the MMM series of financial pyramid schemes, Mavrodi, died in Moscow at the age of 62.

Information gathered that Mavrodi was taken to a city hospital from a bus stop overnight Monday, March 26, after he felt weakness and pain in the chest area. 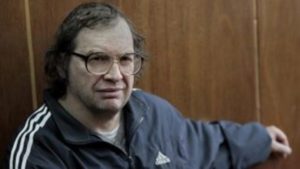 â€œThe emergency team has failed to save his life. He died this morning,â€ the report said. The preliminary cause of death is a heart attack.

What Year Was MMM Created?

Sergei Mavrodi created the company â€œMMMâ€ in 1992. It quickly gained popularity and became the largest financial pyramid in the history of Russia.

The income of the members who joined it was paid out of the contributions of new arrivals, and when the flow of customers ceased to grow, non-payments began.

According to various estimates, the number of victims of the MMM has reached 10-15 million people.

In 1994, Mavrodi became a member of the Russian parliament. Then he announced that he was giving up his privileges: salaries and cars. Mavrodi stressed that he became a deputy only for the sake of immunity. Two years later, before the presidential elections in 1996, he was stripped of his mandate.

All this time he left during the preliminary detention while the investigation was conducted. Mavrodi claimed he is not the beneficiary of the donations and he is not used to flamboyant lifestyle.

His true charges of which he was later convicted of is tax fraud though he claimed that MMM scheme is not a business, but a mutual donation program of which there is no law against such.

The Creation Of Mavro Coin

In 2016, he announced the creation of his own cryptocurrency â€“ Mavro. In the first month, 33,000 people took part in the project. MMM stands for the first letters of the foundersâ€™ surnames â€“ Sergei Mavrodi, Olga Melnikova and Vyacheslav Mavrodi.

However, some people believe that it stands for Mavrodi Mondial Moneybox. The company got a lot of money from people â€“ it was making about 50 million USD each day. MMM started as a company that imported office equipment.

The Rise And Fall Of MMM In Russia

However, there were some problems. In January 1992 the company was accused of tax evasion. This led to problems with the financial support of companyâ€™s operation. It struggled. But how did MMM achieve that? The company promised annual returns for up to 1000% to private investors. It sounded quite attractive, and a lot of people were eager to invest.

With strong advertising and naive people (no one heard about scams during that time), MMM became one of the most successful companies in Russia.

However, the success didnâ€™t last for long. Eventually, the company was shut down in 1994 and it declared bankruptcy in 1997. Unfortunately, everything didnâ€™t end there.

After 14 years, the company reopened as â€œMMM Global.â€ MMM in Nigeria MMM started in Nigeria in November 2015, when it launched a new website for Nigerian audience.

In Nigeria, the company decided to lower the standards and promised profit was 30% per month. The primary target of MMM was unemployed people. The number of people that signed up by the late 2016 was shocking â€“ 2.4 million! They hoped that MMM would give them easy money and they had no doubts. Unfortunately, after a year of work in Nigeria, MMM announced the freezing of all membersâ€™ accounts.

According to the company, the reason was â€œsystems overload and the negative attention brought on by the Government and mass media.â€ After the freeze of membersâ€™ accounts, people started to panic. Sadly, the worst thing that happened was that the panic led them to even attempt to end their lives.

Things got so serious that even the Lagos State Emergency Management Agency asked the citizens to look out for each other and call the emergency number if someone was trying to kill himself. Surprisingly, on January 2017 MMM Nigeria reopened. Also, on February 11th the company announced the lifting of the withdrawal limits on 2017 mavro. Investors were angry because of the delayed, and unfulfilled payments and some people left the scheme.

The investors who stayed loyal to the company were given assurance of getting back their money. But the company stated that in order to get the pre-2017 money, investors should add new money. And the more they add, the higher their chances to get the previous money back. Though MMM came back, it could not regain the trust of the bulk of the investors failed to make huge impact it had when it was first introduced.

About 110 countries suffered from MMM, including various African countries like Kenya, Ghana, and Zimbabwe. People believed in the company and wanted to get a lot of money almost out of nowhere.

Meanwhile, when MMM froze membersâ€™ accounts, Nigerian media warned the citizens against investing in the Ponzi scheme reporting that the scheme had collapsed, but many turned deaf ears. Mavrodi himself wrote an open letter to Nigerian journalists whom he claimed were causing unnecessary tension in the country. According to him, MMM will be back by January as earlier stated, hence the rumour about the scheme collapse should stop.

Are You Still In The Scheme? Be careful though.

Despite losing billions To MMM, Nigerians another Ponzi…