Last year October, Huawei CEO Richard Yu revealed that the Chinese company is working on a foldable phone that could be released in 2018. The statement was made just a month prior to the period Huawei filed a patent application with the World Intellectual Property Organization (WIPO). The patent was published yesterday by that organization, and includes images of what Huawei has in mind.

Looking at it in an open position, the foldable Huawei device comes in form of a full-sized tablet. It appears to fold in the middle to become a smartphone. Back in October, when he discussed the foldable phone that Huawei was working on, CEO Yu mentioned that there was a “small gap” between the two screens when they are opened in the tablet position. At the time, he said that Huawei had to find a way to get rid of the gap. Since this patent was filed before his comments were made, we assume that the mechanism in this patent does not solve that issue.

Other phone manufacturers are believed to be working on a foldable phone. Earlier this month, a Merrill Lynch analyst said that Apple is creating a folding iPhone that could be introduced in 2020. Microsoft has received some patents for its “Andromeda” foldable device, and Samsung is reportedly set to unveil the long-awaited foldable Galaxy X sometime next year.

Below are the images from Huawei’s patent. 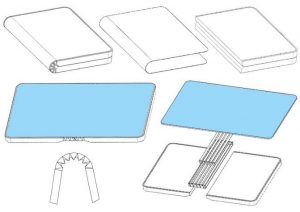 Apple To Ditch Lightning Cable, Future iPhones To Use USB-C