Huawei To Release The World First Smartphone With 512 GB Storage

According to information from China, Huawei is expected to launch the P20 series next week, and it is also planning to unveil the first smartphone with 512 GB of storage. Although, itâ€™s still not clear if the phone in question will be one of the P20 phones, or itâ€™s going to be a different device entirely.

A phone listed on TENAA with a model number NEO-AL00 was edited to say â€œ6GB RAM + 512 GB ROMâ€ in the Memory section on the last row. The fact that the change was quite demanded after the early certification request makes it convincing that it’s no typographical error. 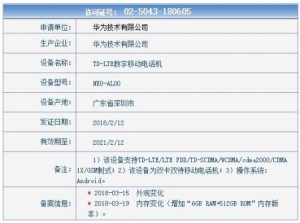 Though Huawei has enterprise-level data storage solutions, it still found wanting in mobile storage production plants, nor has an in-house technology to build 512 GB memory chips. This implies that the NEO-AL00 phone will either have Samsungâ€™s storage solution or Huawei is in the last steps of developing the tech and might introduce it really soon.

At present, Huawei only has two phones that can boast of 256 GB storage – the Mate 9 Porsche Design and the Mate 10 Porsche Design, so perhaps another Porsche edition will be loading to make its debut with the 512 GB landmark.

Whatâ€™s your take on going around with the whole world in your palm as your phone?