It seems Google is testing out a more rounded search bar for its mobile site. This assertion was based on screenshots that were shared in a published report yesterday. If you compare the two screenshots, you will observe some differences between current look of the page with that of the tested one.

The multi-cored “G” insignia has been added to the left of the new rounded search bar, and the search icon is no longer found inside a blue box. 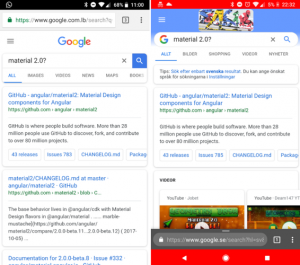 Other Notable differences are, the headings under the search bar (All, Images, Videos, News, Maps, Books) are no longer hemmed in by lines on top, bottom and on both sides. The change to the search bar that makes it more rounded at the ends matches the look used by Google on the Pixel Launcher.

By the way, should you be wondering this was gotten from, the test site was discovered in Sweden. Well for now, no word from Google on when, or if, this change might become official.

You can now remove your personal data from Google search results

You can now remove your personal data from Google search…

Google Updates and Search gets new features to prevent the…