Before now, some OEMs have been taking advantage of a certain loophole to ship their devices with pre-installed GApps by ignoring Google’s CTS certification process. They also audaciously encouraged users to sideload those apps. Though, Google has always been controlling which devices ship supports the proprietary GAppsâ€”a package that includes such necessities as the Play Store and Google Play Services. The tech giant as well permits custom ROM users to flash the necessary payload on top of their modified OS.

According to XDA Developers, that gap has now been closed. Google Play Services will soon check the build date for a given system image, and if that date is after March 16th, it will be blocked from completing the sign-in processâ€”though thereâ€™s still an exemption for custom ROM users as they can manually register their devices.

No info yet as to confirm if this development will affect otherwise stock bootloader-unlocked devices since they also report as “uncertified” in the Play Store, but it will likely impact those who ROM. So far as we can tell right now, the block only applies during the sign-in process, so it is possible that existing/already setup devices may be grandfathered in. Furthermore, you will be able to register up to 100 Android IDs to your personal Google account for exemptions. (The page to register errors out when submitting an ID at the time of writing.) 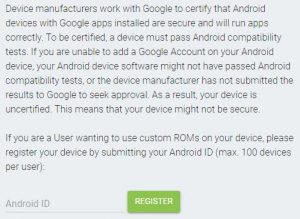 Since you have to actually pull that ID manually to submit it, it does complicate an otherwise simple setup process, but at least it’s an option. That ID is also new each time you factory reset, so unless Google changes things, you’re limited to 100 wipes across every phone you might ROM in the future, just slightly less annoying than Play Music’s ridiculous device authorization limit.

Looking up that Android Device ID isn’t as simple as finding your serial number or IMEI, which will probably be a future point of annoyance for many. Additionally, most devices shipping with uncertified/sideloaded Play Store installations are probably cheaper phones, purchasers of which are less likely to have the time or resources required to pull the ID and fix the problem. 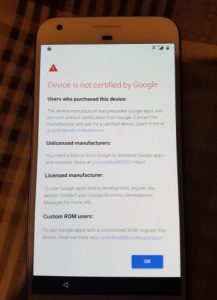 It’s not a stretch to think that less technically-minded people searching for workaround access to GApps might install whatever random apps claim to fix it, exposing themselves to malware in the process. Let’s just hope that Play Protect continues to work on uncertified installations, or Google might be accidentally driving amateurs into the arms of malicious software.