Before now, the iPhone app could run on the iPad, but of course not optimized for the slate, basically a stretched out, awkward situation. The new iPad version supports both portrait and landscape modes.

The Battle Of Assistant Apps For The iPad

Google Assistant has joined the league of voice assistant apps that are getting iPad love in recent times. Alexa has been updated for tablets, including the iPad. 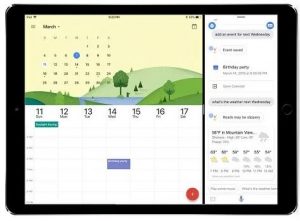 The app is also now has support for a greater range of languages, including: English, French, German, Italian, Japanese, Brazilian Portugese and Spanish.

Of course, Siri is still built into the iPad and has the advantage of being called up holding the Home Button down for a few seconds. But perhaps Google can win some converts with a native app of this sort.

WhatsApp For iPad Coming Alongside The Multi-Device Support…