Facebook Chief Executive Mark Zuckerberg has for the second time apologized over a â€œbreach of trustâ€, taking out full-page advertisements in British newspapers.

â€œWe have a responsibility to protect your information. If we canâ€™t, we donâ€™t deserve it,â€ said the advert, signed by Facebook founder Zuckerberg on Sunday. 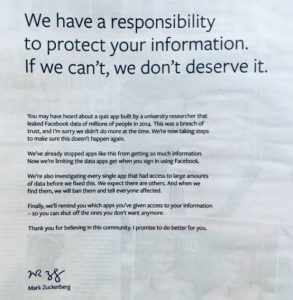 Zuckerberg said an app built by a university researcher â€œleaked Facebook data of millions of people in 2014â€.

â€œThis was a breach of trust, and Iâ€™m sorry we didnâ€™t do more at the time,â€ Zuckerberg said, reiterating an apology first made last week in US television interviews.

This follows allegations by a whistle-blower that British consultancy Cambridge Analytica improperly accessed usersâ€™ information to build profiles of American voters that were later used to help elect US President Donald Trump in 2016.

The plain black text apology on a white background, with only a tiny Facebook logo, appeared in Sunday publications including The Observer â€“ one of the newspapers whose reporting on the issue has sent Facebookâ€™s share price tumbling.

Cambridge Analytica says it initially believed the data had been obtained in line with data protection laws, and later deleted it at Facebookâ€™s request. The consultancy said it did not use the data in work it did for the 2016 US election.

Zuckerberg, whose firm has lost more than $50bn in market value since the allegations, said Facebook would give users more information and control about who can access their data.

â€œThank you for believing in this community. I promise to do better for you,â€ he wrote.

Advertisers Mozilla and German bank Commerzbank have suspended ads on the service and the hashtag #DeleteFacebook has been trending online.

On Friday, electric carmaker Tesla Inc and its rocket company SpaceXâ€™s Facebook pages â€“ each with more than 2.6 million followers â€“ were deleted after Chief Executive Elon Musk promised to do so.

How to Download And Install Best Android Apps & Games for Free

Facebook Was gathering Your Call And SMS Data For Years