Is Xiaomi gradually taking over the global smartphone market? The Chinese company became the biggest smartphone vendor in India’s richest (and second largest) market of Maharashtra during Q4 of 2017.

Xiaomi managed to overtook Samsung to pull a market share of 31.2%, thanks to the crucial Redmi Note 4’s sales while Samsung could only claim 15.3%. 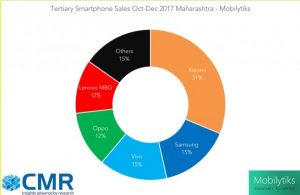 Vivo, Oppo and Lenovo make up the rest of the top 5 vendors during the quarter.

It’s important to re-establish that the numbers above concern only the Maharashtra state (home to the city of Mumbai) and not the whole of India. The state accounted for 13.7% of smartphone sales in India.