The Apple iPhone X was launched with a price tag of $999, and a number of people jokingly said that price should be for the gold model. The Russian luxury company Caviar decided to take the statement to the soul and brought up the rebuilt versions of the flagship, including one with a meteorite-coated body and a variant with over 300 precious stones.

And now, Caviar is introducing a new product it called iPhone X Putin Golden Age in a bid to celebrate Vladimir Putinâ€™s win at the Russian elections last week where over 76% of the citizens voted for him.

ALSO READ:Â A Gold iPhone X By Caviar Is Now Available For $4,510

Instead of Caviar making a fancy sticker or a bumper case, the Russian company chose to rebuild the entire back. The face of Vladimir Putin substitute the regular Appleâ€™s logo in the center. An embossed logo of the Russian Federation is placed below the portrait and the back panel is completed by Kremlin in 3D, and a quote that is translated as â€œWe are ready for the brightest future and we will get thereâ€. 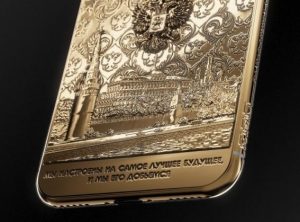 The coating of iPhone Xâ€™s back is 24K pure gold, including the rim and the buttons. There are 76 units of the phone, each of them marked with its serial number on the side. The number celebrates the 76% vote. 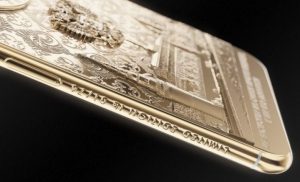 According to Caviar, the phone is a symbol of triumph and the unity of the Russian people as one team, â€œjust like the President saidâ€.

Now, going to what gives your wallet severe thoughts;

Custom iPhone 12 Pro With Biden and Trump Portraits By…