Android P is yet to be made public, however a developer preview has been pushed out. One major benefit of this next version of Android OS is that it will prevent apps from using your smartphoneâ€™s microphone or camera whenever theyâ€™re in the background and not actively being used on screen.

If you have been worried about secret recording activity happening on your phone, Google has got your back with Android P. Whenever an app in the background tries to use your microphone or camera, a new security feature will trigger a notification to tell you and you can decide to let it happen or not.

ALSO READ:Â PhoneKid: Android phone for children, Can Never Be Switched Off 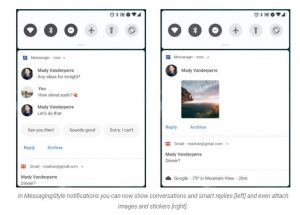 Indoor positioning via Wi-fi means your smartphone will be able to measure the distance to multiple Wi-fi hotspots and use this information in indoor positioning apps to calculate the near exact location of the phone with an accuracy of 1 to 2 meters.

HDR VP9 makes it easier to watch HDR videos, while HEIF is a new image compression format that can compress images to less than half the size of a JPEG while maintaining higher image quality.

We are in the age of dual and triple camera. Perhaps we shall even see quad cameras soon. Android P includes native support for multiple cameras.

Think of using twitter and wanting to share a quick selfie, so you call up the camera from inside the tweet you are composing. You will be able to use zoom or even bokeh in that situation.

There has been no mention of Bluetooth HID device profile that enables your smartphone as an input device.

Android P wonâ€™t be ready for the public until 3rd or 4th quarter 2018, so it is still a long way off. If you are a developer and need to test out things with your apps, you can download and use Android P Developer Preview right away. Just head this way.

The image above roughly details the release timeline for Android P. The next Developer Preview will be out in May, followed by DP3 and DP4 in June, and DP5 in July. The final build will become available for Pixels at some point in Q3 – so before the end of September. Note that only from DP2 onwards will the builds have a ‘beta’ quality, at which point you’ll be able to enroll your compatible device into the Android Beta program to try the new version.

Amazing! Nokia 7 Plus Sold Out In Just 5 Minutes

You Can Now Video Chat On Facebook Messenger Lite