Today, we brought to you the Top 10 camera smartphones released by Consumers report. And now, here is the 2017 top 10 smartphones list according to a report. This time around, Apple loses the top spot while BBK keeps growing, Gionee entered the spotlight for the first time, and Samsung smartphones still rules them all.

You might possible be asking who BBK is, since you know Samsung, Apple and even Gionee. Well, BBK Electronics is the parent company for the polpular Oppo, Vivo, OnePlus and Imoo.

Going back to the chat, Apple lost a spot and move down from number 2 to 3. Gionee finally manages to make the list for the first time.

According to the statistics provided by Tomi Ahonen Consulting, Apple sales â€œwere flat in a year that was flat. Out of the Top 5, all other 4 manufacturers GREW their sales â€“ Samsung by 3%, BBK by 29%, Huawei by 10% and Xiaomi by 70%. Donâ€™t fall into the silly trap to think, that Apple is somehow â€˜doing fineâ€™. It is LOSING the battle.â€

Now moving to Africa, who rules the continent, is still Samsung or who? Definitely not Apple.

In Africa, the story for Samsung is not the same as the Transsion smartphones overtook the Korean company for the first time. 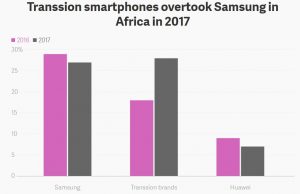 In OS-wise, Android OS controls about 85.4% of the global smartphone market while Appleâ€™s iOS has the rest.