Who has the fastest 4G speeds? Nigeria NOT In Top 90 in LTE Coverage & Speed

While 5G is the latest catchword in the carrier industry, we are still on 4G LTE and itâ€™s yet to even cover 20% of Nigerian cities. Despite the challenge of coverage and attainment of speed, ,modem manufacturers like Qualcomm and others continues issuing out their modems that can take advantage of “pre-5G” up to 2 Gbps speeds, yet carriers can’t hit anywhere close to that in real-life scenarios. Are you curious which country boasts of the fastest LTE network in the world, or what’s the average 4G speed globally?

Well, according to the latest annual report from OpenSignal answers these pressing questions for you. The top two in terms of 4G availability are still South Korea and Japan. 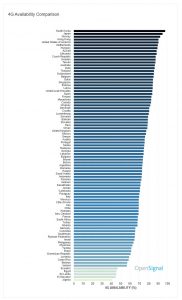 Talking about â€œaverage 4G LTE speedsâ€, the world hasn’t seen much progress since the previous annual report. Even the fastest LTE networks, such as those in Singapore, the Netherlands, or Norway, are still in the 40-45Mbps range, while “the Holy Grail of 50 Mbps remains just unreachable,” according to OpenSignal. 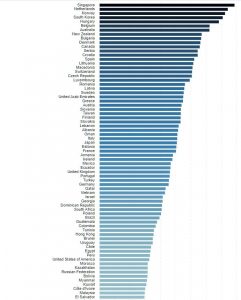 Nigeria is not even in the top 90 countries in terms of 4G LTE availability and speed? This shows that we are deeply asleep in the telecom sector.

Glo giving out free 4G LTE smartphones to all its customers. How to qualify